Skip to primary navigation Skip to content
Click here for more information about COVID-19
NOTICE: In order to protect constituents and out of an abundance of caution during the COVID-19 crisis, I’ve asked my staff to telework and our Illinois and Washington, D.C., offices are closed. Thank you for your patience and understanding at this time.
Home
News
In The News
December 10, 2018

After a lengthy flight, most passengers are poised to spring into action when their airplane lands.

But what if, during the flight, the airline damaged your "legs"?

That's how passengers who use wheelchairs like U.S. Sen. Tammy Duckworth feel when their means of independent transportation are broken by carriers' mishandling.

The problem sparked a new federal rule requiring airlines to declare how many wheelchairs or motorized scooters are damaged or lost. It goes into effect this month after long delays.

The change means flyers with wheelchairs can check a government website to find which carrier breaks the most wheelchairs, just as they could check stats for on-time arrivals.

"It's really consumer-empowering," said Duckworth, a war veteran and Hoffman Estates Democrat who helped pass legislation to speed up implementation of the rule.

Duckworth, who lost both legs while flying a mission in the Iraq War, has had two wheelchairs break after they were stored in baggage holds on flights between Washington and O'Hare International Airport.

In one case, a solid titanium rod that connects the seat and frame was fractured. "It's 5 inches long and 1 inch square. I don't understand how it could be snapped," Duckworth said.

Not realizing the rod was broken, she sat down only to have the chair slowly sink to the ground. An inferior loaner was offered, but "I couldn't even roll myself in it," said Duckworth, who travels all over Capitol Hill with her motorized wheelchair.

"My wheelchair is my legs and it can't be easily substituted."

Members of the Paralyzed Veterans of America agree. The nonprofit group says there are no figures on the number of damaged wheelchairs, which is why the new reporting requirement is a huge step.

But "we know there were 32,445 disability-related complaints of any kind filed with domestic and foreign air carriers in 2016," said Liz Deakin, spokeswoman for the organization.

The Paralyzed Veterans of America sued the government in 2017, claiming the government was ignoring a Jan. 1, 2018, rule implementation date because of airline industry pressure.

Duckworth also wrote to Transportation Secretary Elaine Chao demanding the rule be enacted, and she lobbied to include a deadline in the recent Federal Aviation Administration reauthorization bill.

Just after she sent the letter to Chao, another wheelchair malfunctioned after a flight, Duckworth said.

As a result of the FAA bill, airlines must start reporting wheelchair and scooter damages this month and data will be available online in February at the U.S. DOT's Consumer Air Travel Reports website.

Also available early next year will be updated information on lost or damaged checked luggage. Previously, this information was counted by the number of reports filed by passengers. Now, it will be listed by actual mishandled bags. 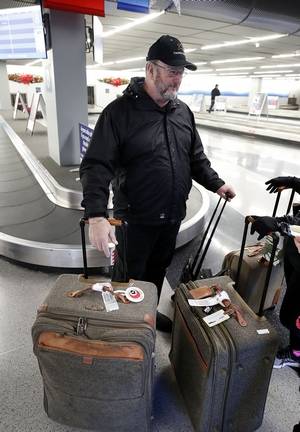 Roger Cannon of Palatine admits he has had few problems with bags during his years of travel at O'Hare International Airport. A new federal rule offers consumers more information about mishandled luggage and damaged wheelchairs. - Steve Lundy | Staff Photographer

Diane and Roger Cannon travel extensively and so far the airline industry has treated their luggage kindly, the Palatine couple said at O'Hare Thursday.

"You're looking at a piece of luggage that's almost 30 years old," Roger said, pointing to a sturdy Hartmann suitcase.

But "I think any information is good," Diane Cannon said.

Got a story about damaged wheelchairs or luggage on flights? Drop an email to mpyke@dailyherald.com.